From July 3rd to 13th, 2014 the Hand in Hand school in Jerusalem participated for the second time at a peacecamp in Austria. The peacecamp-project exists since 2004 and takes place each summer for 11 days in Austria. peacecamp 2014 took place in Lackenhof, a remote tiny little village high up in the Austrian mountains – a place far away from the distractions of ordinary life which inspires peace of mind and stimulates a real encounter with oneself and with others. 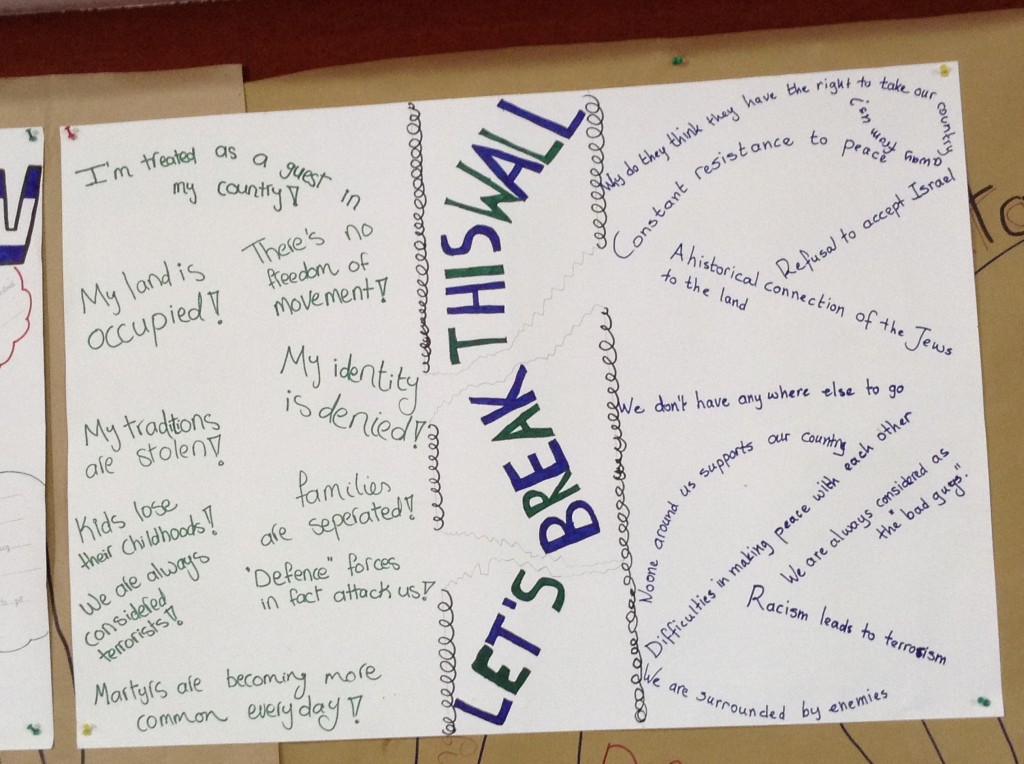 As in the previous years, peacecamp hosted delegations of one teacher and eight pupils (15-17 years old) from four different nations and countries. As in the previous year, the Arab delegation came from the Hand in Hand School in Jerusalem, the Jewish delegation from Zvulun High School of Kibbutz Yagour, the Hungarian from the Szent Lazslo Gymnasium in Budapest, while the Austrian group came from three different high schools in different parts of Austria. They came “to meet new friends”, to learn about the other cultures and nations, but mainly, as most of them said, to speak up their minds and “to listen to other perspectives”.

Guided by their teachers in their respective schools, each delegation brought material to the peacecamp, which was elaborated during the 10 days in various ways: “I feel good”-sessions, “large group”-discussions, “mission-impossible”-tasks, “talks4peace”-sessions, and creative workshops with percussion, mask building, singing and acting enabled the pupils to deepen their reflections about their own individual notion of peace, about their personal identity, their family history with their respective cultural, national and religious roots; all these activities, facilitated by teachers, psychologists and artists led to a final show4peace , performed in a theatre in Vienna in front of a real audience.

This year’s peacecamp was a special challenge for us all and different from the previous ones in two ways: it coincided with Ramadan, enabling us all to learn about this important Moslem holiday. It also sadly coincided with the new violent outbreak of the Gaza-Israeli conflict – challenging the pupils of both group to find ways to bridge over the evolving new friendships and the very conflictual and threatening issues, part of their life and reality back home.

The two groups from Europe helped to establish a dim light of hope, demonstrating that in Europe century long, violent conflicts with a lot of bloodshed and wars between nations could be resolved and give place to a joint project – safeguard of peace – the European Union.

All participants – pupils and adults – left the peacecamp with a certificate designating them as “Ambassadors of Peace”. All were asked to see this as a mission and will hopefully bring back to their home and to the social environment to which they belong some of the tools4peace they have discovered at the peacecamp

This year’s peacecamp received a lot of attention from the media: http://2014.peacecamp.net/tags/peacecamp%20in%20the%20media/

Pupils were asked to send us a few lines about their personal peacecamp-experience, you can read these in (peacecamp 2013) and (peacecamp 2014)