I am told not to be alarmed when I encounter aggressive anti-Semitism in Hungary. After all there exists a vibrant Jewish culture in Budapest and there was hope the “conservative” Fidesz government would curb the development of aggressive Anti-Semitism – although it is tolerating the implicit and not so implicit Anti-Semitism of some Fidesz journalists at present…

But Fidesz is supposed to do this only to attract Jobbik voters. A dim hope indeed, when a random sample of Hungarian media proves the continuing anti-Semitic incitement after the overwhelming victory by Fidesz at local and national levels.

There are the Fidesz politicians who light Chanukah candles and Fidesz media like “ECHO TV” and the Budapest daily “Magyar Hirlap” (both owned by Fidesz millionaire Gábor Széles) who regularly distribute anti-Semitic incitement, often in its crudest form.

One of the arguments for a new media law in Hungary was the anti-Semitism present in Hungarian media. But traditional Nazi propaganda can be legally rehashed and is taken for true by many Hungarians. They consider the Jews who pull the strings behind the scene as the root of evil. The extreme diversity of Jewish existence is taken as proof for the reality of the mythical hate-figure of the extreme right. The intellectual assimilated Jew stands for the despised modernity; the religious Orthodox Jew fits into the traditional image of Christian Anti-Semitism; the economically successful Jew stands for the “money-grubbing capital” and liberalism, and the Jewish socialist for abominable “Marxism”.

If you want to understand Hungary in the 21st century, visit Budapest and see the plaque in the military history museum which honors the memory of the Hungarian gendarmes, an organization whose record in the Holocaust is comparable to that of the SS.

The Jerusalem Institute for Global Jewish Affairshas published a remarkable report on Anti-Semitism in Hungary by László Molnár in November 2010. I am quoting from the chapter “Anti-Semitism in the Subculture”:

“After the 1990 transition, the quickly emerging extreme-right subculture also strengthened the traditional anti-Roma attitude. A good many neo-Nazi, Hungarist, “nationalist rock” bands came into being in including HunterSS, White Storm, Endlösung, Blood Libel, Power and Vendetta, Romantic Aggression, New Order, Mos-OI, Stoned Cherry, and others. All of these have used extreme racist language and symbols. A song by Mos-OI threatens to turn the country into a “Gypsy-free zone”. It contains the lyrics: “The flamethrower is the only weapon I need to win, all Gypsies, adults and children we will annihilate, but we can kill all of them at once in unison, after it is done we can say it is a Gypsy-free zone.” A song by White Storm proclaims: “Let’s exterminate Gypsies!” In their racist outlook, “every Gypsy is a criminal, there is only one solution for them: Auschwitz…. There is a cloud of dust above Poland, where every Gypsy is traveling in the sky.”

These and many other bands perform at illegal concerts and at the infamous Magyar Sziget or Hungarian Island Festival. This year this summer camp for “nationalistic youth” was organized for the tenth time. The camp offers national-heritage competitions featuring archery, animal tracking, runic script, Hun cuisine, as well as family and children’s programs and with anti-Semitic and racist lectures that deny the historical Jesus his Jewish identity and talk about “Jewish world conspiracy”.

These events typically involve the use of banned symbols, uniforms, lyrics, banners, and signs, as well as an assortment of outright illegal activities – including violent fights, atrocities against journalists, displaying banned symbols such as swastikas, inflammatory concerts and lectures, and so on. In 2009 several participants attacked the local Roma population, and beat up two men. In 2010 a dozen masked men brutally beat three other participants. The media are constantly terrorized when trying to cover the event. The chief organizer of this annual festival is a Jobbik member of parliament, Gyula Gy. Zagyva. He has several times threatened journalists lethally, and only recently attacked journalists of the democratic weekly Hetek.

Despite the fact that the existing law would be sufficient to incriminate such incitement, the perpetrators were not brought to justice. Those arguing in favor of the new media law also mentioned pornography. That’s probably why (as Eva S. Balogh notes) Annamaria Szalai was given the job as “chief censor” of Hungary. Viktor Orbán named her chairman of the new National Media and Telecommunication Authority on August 11th 2010. “She will have almost unlimited power in overseeing the Hungarian media and she cannot be replaced for nine years, regardless of what happens in the next two elections. Yet 168 Óra has proved that was the editor-in-chief of a soft-porn magazine published in her hometown of Zalaegerszeg in 1991.”

The new 170-page law attempts to regulate all television and radio stations, newspapers and Internet sites. It even applies to any blogs and foreign media available in Hungary.

At the center of the control mechanisms is a new government agency staffed exclusively with Fidesz members. It has the power to impose fines of up to €750,000 ($983,000) for articles with objectionable content – and has the sole authority to decide what is deemed objectionable. All staff-members of public media organizations will be placed under government supervision.

Last week Hungarian TV announced that despite foreign criticism “we are not even considering” changing the media law. According to Reuters ”That comment is not surprising. It was Orbán who said ‘Hungary shouldn’t have to adapt to the European Union, the EU should adapt to Hungary,‘ during his first term as prime minister 11 years ago, when Hungary was still seeking EU membership.”

Government officials did not react to a request for comment. But Laszlo L. Simon, a member of Orbán’s FIDESZ party and the head of parliament’s Cultural and Media Committee told the state news agency MTI Wednesday that the foreign criticism was a “’European circus’ directed by the continent’s Socialist parties”.

The most visible sign of the new Hungary is the in 28-by-20-Inch-plaque that is now mandatory in all government buildings (including schools, ministries and military barracks). “A new social contract” has sprung into being “as a consequence of the successful revolution in the voting booths. […] Hungarians have voted for a new system, a system of national unity.” The government, the plaque continues, will complete this unity “resolutely and without compromise”. 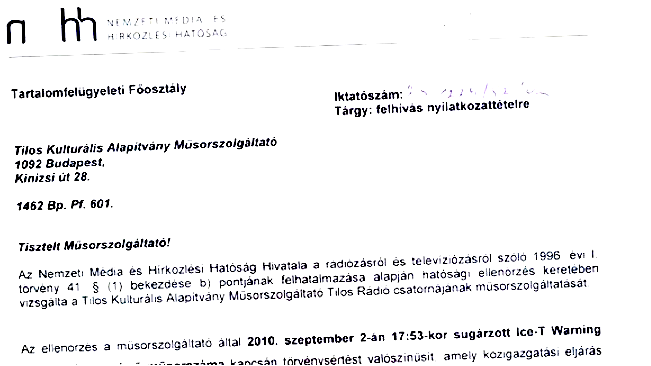 Tilos is a non-profit community radio station in Budapest, regularly organizing various party events around town. The theme of Tilos Slam 2010 was “DiscrimiNATIONS”, with which Tilos proudly joined the anti-racist action week on the International Day for the Elimination ofRacial Discrimination on March 21, 2010.

The Department for contents of National Media and Info communications Authority has warned Tilos because it broadcast music of the rapper Ice-T on September 2 at 17.53. This constitutes a “probable criminal act, which justifies prosecution by the administrative”. The music aired by Tilos Radio was considered to be able to influence the physical, moral and spiritual development of young people under 16 years and as such it should be classified as Category III music to be broadcast only between 21 and 5 am.

Nevertheless the Hungarian censors are scandalized by the rappers remark “Catch you in the streets and your ass will get tossed”.

Go to any Hungarian school and listen to the talk of youngsters under 16 years and one will doubtlessly hear worse.

Probably no other language contains so many expletives as Hungarian.

Arthur Waley wrote: “What is hard today is to censor one’s own thoughts, – To sit by and see the blind man on the sightless horse, riding into the bottomless abyss.” (Censorship)

It’s really charming how a small antiracist Hungarian Radio Station irritated Hungarian censorship by broadcasting a song of an American rapper. Yet the rampant and obvious anti-Semitism found in Fidesz publications does not worry the Department for contents of National Media and Info communications Authority.