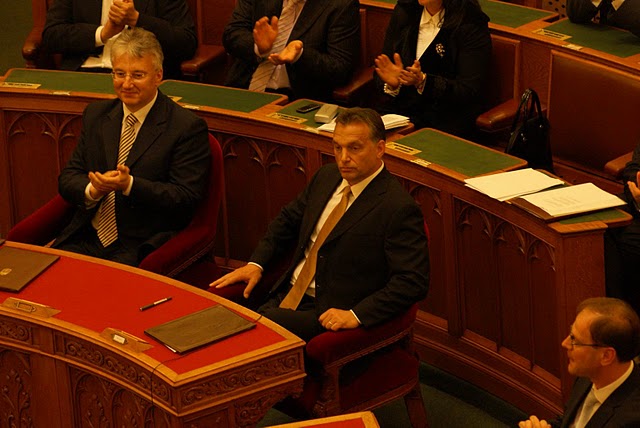 Viktor Orbán thwarts freedom of the press, panders to Putin, lets EU funds seep away – why this is irrelevant for many Hungarians.

On Sunday, 3 April, the Butscha massacre became public. Hundreds of bodies of civilians, children, women and men, tortured, mutilated, raped, with gunshots in the back of their heads, found by Ukrainian troops retaking the suburbs of Kiev. Europeans were shocked to see the return of evil.

On the same evening in Budapest, this was not an issue for Prime Minister Viktor Orbán. In his victory speech, he laughingly named President Volodymyr Selenskyj and George Soros as opponents he had defeated in the elections. Orbán, whose political talent is undisputed, declared: „The left offers blood for oil. The decision of the left is the decision for war. We want peace!“ Many Hungarians believed this too.

The message since the beginning of the war has been: Ukrainians are poor and hostile to Hungarians. They pretend that with Putin’s help Transcarpathia can be won back from Ukraine. To this day, the reduction of Hungary by the peace treaty of Trianon (1920) is not accepted. And this non-acceptance is held in high esteem and celebrated in a big way every year. Even after 100 years, this commemoration is still much more important than the memory of the deportation of almost half a million Jews in the spring of 1944.

The declaration that Hungary will not let any weapons through to Ukraine and will remain neutral in this conflict was not only greeted with joy by supporters of the governing parties. Siding with mass murderers and blackmailers, paying for their oil, their gas with roubles, thus breaking the EU boycott, getting into debt with Russia and tolerating their spies is admired as statecraft in Budapest. The real shame is that a large part of the opposition agrees.

The electoral roll is neither public nor has it been updated. So votes cast in the name of dead people could also be valid.

Since 2014, the opposition has believed that it can win elections if only it is united and the parties united in it adopt some of the government propaganda, because there is supposedly consensus on this in Hungary. With this cowardly tactic, the opposition lost 800,000 voters in the last elections. But even if the opposition had bright ideas and nominated a politically savvy leading candidate, victory would have been impossible in a country where the electoral law has been changed no less than 300 times since 2010.

The OSCE sent 200 short-term and 18 long-term observers – unprecedented for an EU country – before the elections. There can be no question of free elections: Members of the Hungarian minority in neighbouring states could vote by postal ballot or cast their vote in person or by proxy from 19 March to 3 April. On the other hand, Hungarians registered in Hungary and working abroad could only cast their vote on election day at a consulate or embassy. The electoral roll is not public and was not updated before the elections, so votes cast on behalf of dead people could also be valid. In 2020, during the pandemic, a change in the law allowed the photographing of completed ballot papers in the polling booth. This has already happened in previous elections in many places, where voters had to present a photo after casting their ballot to prove that they had put their cross „in the right place“. Those who did not comply could be excluded from public works, social welfare and other benefits by the local potentates.

While in democratic states the change of power does not mean a problem and politicians can deal with each other respectfully despite skirmishes in parliament, Orbán, who was not willing to discuss with the opposition’s top candidate on TV, used to belittle his political opponents. It has already happened that opposition politicians were taken away by the police before elections and their innocence turned out only after the elections.

During the 2018 election campaign, Gyula Budai (Fidesz) had spread lies about two of his opponents, who sued against it and won legally. The Constitutional Court overturned these rulings. According to its decision, the boundaries between statements of fact and expressions of opinion can be blurred in election campaigns, so that a politician cannot be convicted even if he makes serious accusations against opponents without evidence.

Fidesz argued against the left-wing opposition because it had reached an agreement with Jobbik – a former far-right party. But Jobbik had made a political castling with Fidesz and renounced anti-Semitic and anti-gypsy agitation. Many Jobbik voters did not appreciate this and defected to Fidesz, and the Mi Hazánk (Our Homeland) party split from Jobbik with financial help. It is estimated that Fidesz invested more than 13 million euros in Mi Hazánk since its foundation, including almost three million in the last year before the elections. The result was not lacking, this openly anti-Semitic and anti-gypsy party enters parliament with six MPs.

When it becomes obvious to all Hungarians what a sorry state the state education and health institutions are in (Hungary has the most covid deaths per capita in the world), the system that is considered to be set in concrete could erode. Of course, the EU and the US would have to support the few independent media. In Hungary, an estimated four percent of EU funds seep away and find their way into the pockets of Orbán and Co. in a roundabout way. All details of this structural corruption should be made public. The same applies to Hungarian-Russian relations. Orbán has long been able to invoke his close friendship with Poland, the Czech Republic and Slovakia. Because of his closeness to Putin, these states no longer trust him, and the EU has opened rule of law proceedings against Hungary, because Orbán’s „illiberal democracy“ is incompatible with EU values