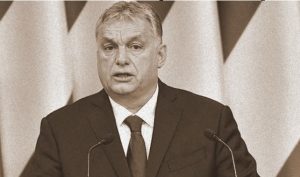 The traditional Summer Camp of the Hungarian governing party FIDESZ in Băile Tușnad (Tusnádfürdő/Tusványos) has become a standard fixture on the political calendar in Hungary. Sadly, it has also established itself as a constant source of irritation and international scandal “thanks” to the speeches the far-right Hungarian prime minister, Viktor Orbán, is giving there.

This was the camp in which he proclaimed, for the first time, his notion of “illiberal democracy”, and this is the place where he usually spells out his plans for the immediate future. Some of these appear outlandish at the time he comes on stage. But, all too often, he then throws the entire his autocratic power and his propaganda machine behind them, trying to convert them into political reality.

As always, the background of his speech this year was a lengthy explanation of his dispraise for “the West”, which, in his eyes, is in terminal decline. Again, he made every effort to make a mockery of any form of European solidarity, this time in view of the current energy crisis. He also declared that the strategy of the EU to help Ukraine in their fight against Russia’s invasion was in fact completely flawed. Europe should now listen to Russia’s security concerns, which “made sense”. It should also stop applying sanctions, which would not hurt Russia but were wrecking Europe. And, the EU should stop supplying weapons to Ukraine, as these would only prolong the war.

But the real bombshell he chose to drop this year was an astonishingly unashamed declaration of far right, racist ideals concerning the demographic challenges Europe was facing. As he explained:

“… The people of the world could be divided into two groups. The first was capable of biological self-preservation. The West was in the other group, which was not. In Hungary, there were still more funerals than births. And if that did not change, Hungarians would soon be “outhabited” from Hungary, the Carpathian basin. Migration – or flooding, or the change of population – had divided Europe into two. In one part, Europeans and non-Europeans were living together. The countries, where this was the case, were no longer “nations”, merely a conglomerate of peoples. This was no longer the West – merely a “Post-West”. And, as the laws of mathematics would have it, around 2050, the “ultimate demographic change” would take place and the majority of the population of major cities in Western Europe would be made up by non-Europeans.

Then, there was Central Europe, where in an intellectual sense, the West itself had moved to. So that now, there was a battle going on, between the two parts of the continent. For their part, Central-Europeans had made a “proposal of tolerance” to the West, namely, to leave each-other in peace, and that everyone should be able to decide with whom they wanted to live together. But, the West had refused that proposal, and would now continue to wage a fight against Central Europe, to make it like they are. Brussels, complemented by the troops of George Soros, was “still trying to push migrants onto us”. What Hungarians wanted was merely not to be forced to suffer the fate that they regarded as “doom for a nation”.

The internationalist left proclaimed that Europe was inherently a place inhabited by “peoples of a mixed race”. That, however, was an ideological scam, a historical and semantic deception. There was a world, in which Europeans were mixing with those arriving from outside Europe. A mixed-race world. And there was the Carpathian basin, where peoples of an intra-European origin were mixing with each other, travelling, taking up jobs and moving about. The people of the Carpathian basin were, however, not of a mixed race, and did not want to become that. They were merely a conglomerate of peoples living in their own European homeland. That was what they had always fought for: In 1456, stopping the Turks in the battle of Belgrade, and later on under Vienna. And this is why the French had stopped the Arabs at Poitiers. Now, as the Islamic civilisation, which was in a constant move towards Europe, had noticed that – because of the heritage of the battle of Belgrade – the migration path through Hungary was blocked, they had decided to replay the battle of Poitiers, and flood Europe with their people more from the South. Therefore, the time would come – not for the present generation, but the next – when Hungarians would have to defend themselves not only from the South, but also from the West. A time when they would have to accommodate Western Christians coming to Central Europe, and stop those whom they did not want to let in, even if they came via Schengen borders.”

So, he said, “…the young generation would have to be prepared to defend itself. Which leads to the question of gender, a “weird obsession” in the West that would never be accepted by Central Europeans. For them, the gender question was not a political debate, but the most vital issue of all. Again, Hungarians wanted nothing else than for the West to accept that the father was a man, the mother was a woman, and that their children should be left in peace. All this “craze” about “transnational” and “transgender” would never take hold in this part of the world. The most Hungarians could pronounce was “Transylvania”, but even that was called Erdély in their language. The present the war, the economic and energy crisis should not cloud people’s vision: in reality, it was still demography, migration and gender that was the defining historical battle, and also the essence of the fight between right and left.”

Indeed, Viktor Orbán’s speech does not need much comment. It is exactly what it looks like. An unashamed declaration of far-right, racist ideals, by a man who is regularly invited to take part to the European Council, and who is confident to soon receive billions from European taxpayers, many of whom he regards as aliens, biologically and historically inferior to himself. A man who now wants to spend his power, and his resources – EU funds included – on educating his followers that the EU was their enemy, a dying imperium that had outlived itself, and was now bringing war onto them, and had to be blamed for the all the trouble that was threatening them.

The only question is: will the EU continue to tolerate him and his government, and will it co-fund his crusade on European values and European democracy?