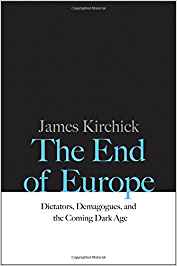 Yale University Press has put out recently “The End of Europe, Dictators, Demagogues, and the Coming Dark Age”. The author, James Kirchick, a 34 year old American journalist has published a remarkably ambitious, provocative and vividly written account of the dark sides of Europe. It contradicts on 252 pages all the optimistic speeches of European political leaders. Therefore, it should be must reading for all those interested in European politics…

Since the dissolution of Yugoslavia Europe is not anymore, a continent of peace and the time of stability, prosperity, cooperation, democracy and social harmony seems to be ending. The author describes a “sequence of violently transformative events ranging from Russia’s invasion of Ukraine to spectacular Islamist terrorist attacks, along with deeper phenomena such as Britain’s exit from the EU and the rise of “illiberal democracy” in places like Hungary and Poland.”

The book contains: 1 Russia: On Europe’s Edge, 2 Hungary: Democracy without Democrats, 3. Germany: The Return of Rapallo?, 4 The European Union: Trouble in Paradise, 5 France without Jews, 6 Brexit: From Great Britain to Little England, 7 Greece. From Polis to Populists, 8 Ukraine: The New West Berlin and the “Conclusion: The European Dream.

The problems described in this pocket book have in common a loss of faith in the universal, humanistic values. “External challenges that could have had an integrative effect – like migration and Russian aggression – are instead having a disintegrative one.”

Questions Europeans have to ask themselves: “How seriously are they committed to Europe? What are they willing to sacrifice in order to preserve the greatest experiment in political cooperation in human history?”

He is critical of the Obama foreign policy, of Obama who declared himself “America’s first Pacific president”.  Kirchick’s arguments “stem from a conviction that the values and interests uniting Americans and Europeans are far numerous, and of greater import, than anything which divides us.”